Video games inspire a kind of relationship, a kind of obsession other mediums usually don’t (though anyone who’s seen cult theories about The Shining may disagree). A very specific obsession brought about by being able to explore a world, a desire to poke at its seams and uncover what’s hidden in a way more literal than, say, academic theorizing. You can theorize about hidden meaning, or you can obsessively poke around a game in order to find anything hidden.

Games that hide strange, even unsettling content exist. For all the urban legends about Grand Theft Auto, about hidden creatures and phantoms, the game does hide, in its vast worlds, eerie ghosts and UFOs. An innocuous game like California Speed (1999, N64 port) can hold a disturbing secret message. And ancient games can hold secrets no one’s yet uncovered.

Synnergist is a cyberpunk adventure game from Vicarious Visions. Released in 1996 for PC, it’s notable for the fact that, years later, it contains an entire secret plot no one has ever found. Scattered new scenes have been uncovered, and we know where the true endgame is, but twenty years later, we’re no closer to unlocking it.

One of my favorite examples, and my personal obsession, are the Action Half-Life maps crafted by a designer named Hondo. This now-forgotten Half-Life mod’s maps conceal secrets: not just easter eggs, but entire secret maps, complex, obtuse mazes, full of abstract puzzles and nightmarish rooms. Unlocking the mystery is challenging, surprising and fascinating.

…and the surreal maze underneath it.

What’s not are video game creepypastas. Video game creepypastas are, on the whole, a garbage fire. They play with the paranormal, drenching familiar old games in photorealistic blood and gore. An unmarked cartridge from a garage sale, and the obligatory “and he thought he saw it in real life” twist at the end. Games haunt and scare, and we always ask how it could ruin someone’s life so thoroughly when they could always just throw it in a box and forget it.

These are that rare few: video game creepypastas that aren’t garbage. They eschew the paranormal (or at least confine it to small, easy-to-ignore passages) and focus on strange mysteries, forgotten history and the obscure and surreal. And they’re presented in no particular order.

Yep, that sure is the Creepy Link Statue. Yep. Anyway, moving on…

I feel like adding a shout-out to the one AND THE GAME WAS HAUNTED creepypasta to be any good. Bendrowned earns kudos for actually taking the time to construct genuinely creepy and well-made videos of the haunted game, and for drawing on unnerving things already inside the game instead of tacking on cheesy blood and bargain-bin Lovecraftianism; an already-creepy statue is a more memorable scare than any “and TOAD STARTED TO BLEED FROM HIS EYES AND LAUGHING LIKE KEFKA”. Bendrowned magically combined every worn cliche of creepy video game stories into a tale that was truly creepy.

According to the blog, a cult horror writer, Ed Kann, joined Square to work on Secret of Evermore but left shortly before its release, his work – and name – removed entirely.

Drawing on uncharacteristically dark elements of the game itself, “Rainwood Works” never tells us what Kann’s darker game would have been. It just spins a mystery, drawn from scattered interviews and screenshots, of a ‘dark’ game turning into a kid’s game. It tantalizes with the implications of the title of Kann’s notorious horror story, leaving us to imagine what it contains.

Intrepid fans do pour over traces of hidden content in favorite games, and I can believe a game with a dark story and atmosphere could be edited before release to be more family friendly (a process I’ll dub the Reverse Conker). Even if Ed Kann is fictitious (and part of a scattered ARG), “Rainwood Works” remains mysterious (perhaps too mysterious) and believable. 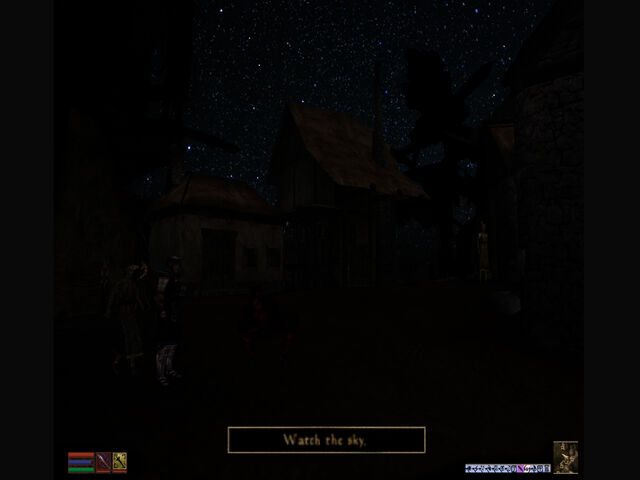 Right now I’m playing through Morrowind, and I keep thinking of this creepypasta about a strange Morrowind mod.

Morrowind is already lonely, eerie and surreal, a beautiful, desolate world. This creepypasta draws on that and makes it…more desolate and surreal. Starting in an already-doomed world, “Jvk” spawns an enemy who constantly drains your health and can only be seen out of the corner of your eye. There are NPCs who urge you to “watch the sky”, and quests eventually lead the player to a massive, difficult dungeon. At its end: a portrait room, with pictures drawn from the player’s PC and a locked door no one can open.

Alas, “JVK” is not content to be the tale of a strange mod, and engages in typical cliché “maybe the game…is REAL!” twists towards the end. But what else “JVK” brings us is a creepy, mysterious secret.

“The Theater” details a game as obscure as it is bizarre, as unfinished as it is obtuse. In this “game” from the early 90s, players were placed in a movie theater lobby, empty bar a pixellated ticket-taker who tells you to go on and enjoy the movie…but entering the theater just brings you back to the lobby. Further exploration changes the ticket-taker’s sprite, fills the games with strange effects and sounds, and teases the author with other levels they’ll never find before the game crashes.

Beyond an unnecessary final twist, “The Theater” is just the story of a very strange game, and the secrets it won’t give up. 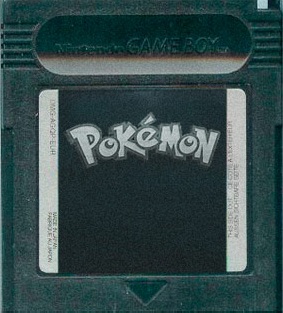 A bootleg Pokémon cartridge gives the narrator a Pokémon named Ghost, whom they cannot remove from the party. Not that it matters: Ghost’s sole move makes the game trivial, immediately defeating all Pokémon in one strike, making them – and their trainers – vanish. Beating the game places the narrator in an empty world, where they must fight the ghost – and face the same fate.

I once played a Pokémon romhack that gave you a knife. Edgelord romhacks? Now that’s a creepypasta I can buy.

A text adventure, distributed only in the Bay Area and too difficult for anyone to beat. A homebrew game like so many from the era of shareware and floppy trading, utterly impenetrable to anyone but its amateur creator. But one man, out of simple boredom, persevered and solved the game – and was given coordinates. Following them into a nearby park, he starts to dig – and uncovers a murder victim. The game was a killer’s confession; he was never caught.

“Pale Luna” is a rarity: a creepypasta that ties a game to the real world in a way that’s not outrageously stupid. Anyone who dove into a shareware disc in the 90s found dozens of games as obtuse as Pale Luna…though hopefully without the murders.

A student abroad in France, bored out of his mind and scrounging bargain bins for something to play, finds a copy of Fallout 2. Seemingly normal, until a NPC from Fallout waves them over and tells them about the Auger, setting them on a confusing new quest. Eventually he finds the Auger, but on his way he’s stopped by NPCs who immediately murder his companions and refuse to let him pass.

The Auger turns out to be a crashed satellite, but it holds nothing of interest. Told to return home, they find everyone massacred – and the world full of ghost towns and glitches.

Told that their copy of Fallout 2 was a special edition, crafted by a desperate Interplay and left unfinished, that somehow found its way onto shelves. Alas, as with all horror protagonists, the copy was misplaced.

Extensive, well-edited screenshots augment a story of surreal, creepy unfinished content, a lost quest leading to a dark world with no end in sight. “Auger” manages to be creepy while keeping everything firmly within a game.

I said this list wasn’t ranked, but that was wrong: everything’s unranked, except for “Killswitch”, which is clearly number 1. “Killswitch” is the finest video game creepypasta this side of Polybius.

It’s not even a creepypasta. “Killswitch” hails from Invisible Games, a blog “documenting” surreal games and their creators. “Killswitch” is just one of its entries, and the most famous.

A mysterious adventure game that offers a choice between two characters: a woman, Porto, and a ghost, Ghast, more powerful but far more difficult to play as given his total invisibility. As players navigate the game and uncover the game’s story, they eventually discover its cruelest secret – upon completion, the game deletes itself so it can never be played again. Due to the difficulty of playing as Ghast, no one beats the game as him, leaving his side of the story unknown.

Copies of the game dwindle, until only one known copy remains. Bought at auction, the buyer offers to record his gameplay for fans…but the only video shows him crying, lost at who to choose for his only run through the game.

The game itself is a horror-themed political screed with storytelling techniques far beyond its time, a sidescroller that’s grayscale – bar the color red. Killswitch itself sounds like a game I’d like to explore: not an incomplete goof, but a complete world to explore – and one you can only explore once. A story about a game designed for the mystery-obsessed, and designed to utterly shatter them, “Killswitch” is inventive, well-written and fascinating.

The blog post is over. You’ve been writing it for months, writing so intently you bled photorealistic blood. But now you’re free. Though, sometimes you think you see it…you think you see a terrible video game creepypasta out of the corner of your eye. Maybe……you’re never free…..it knows your secrets, it knows you abandoned it, it…IT’S COMING THIS WAY….. 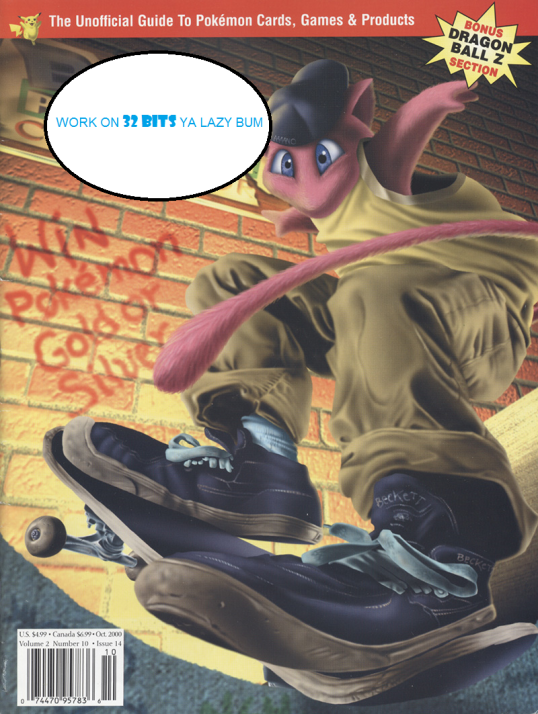